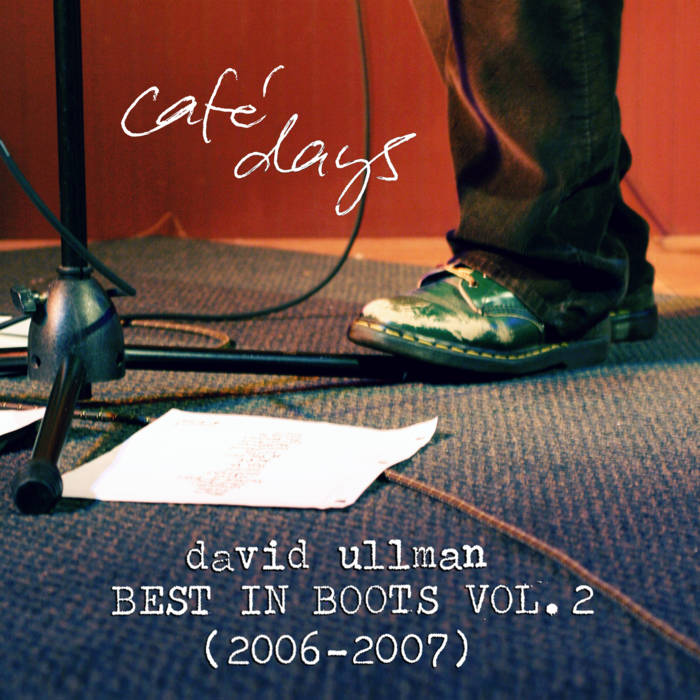 The 26 performances here were pulled from about a dozen different café shows I played from 2006 to 2007. Though I’m not entirely sure why I was recording these gigs, I definitely learned a lot from them at the time--especially the one also captured on video. I came to think of them as “game tapes,” a way for me to evaluate my performances and improve. After seeing that video, for instance, I made every attempt to stop singing with my eyes creepily half-closed and rolling back in my head. Hearing the playback of these cassettes, I began to hone my stagecraft—even though the “stages” on which I was learning were really just the corners of coffee shops whose managers were kindly enough to grant me monthly gigs.

As these field recordings were made hastily, without any means of monitoring the output of my voice-and-guitar amp, the quality and character of the sound varies from song to song. However, the composite show I stitched together feels to me now like a satisfying snapshot, capturing the best of what I was doing back then.

In an attempt to assemble something both best-case-scenario-exemplary and routinely-representative of what you might have encountered wandering into one of these gigs in ‘06/’07, even the song intros were carefully selected. You’ll hear a loose back-and-forth and familiarity with the audience develop, folks sharing birthdays and anniversaries, as well as my misguided invitation for requests of other people’s songs I was sure not to know.

You’ll hear evenings where the room was full of family and friends. You might also recognize the isolated sound of yourself clapping on one of the… Ahem… More… “Sparsely attended” shows.

You’ll hear early renditions of the songs that became my first album, as well as oddities like “Mulletman” (its first public performance!), “Snakebit” (a coffee-shop-sanitized version), and “Darkest of Days” (for STEVE).

You’ll also hear 11 cover tunes I was favoring at the time. These selections say a lot more about my influences and aspirations than I ever could in an essay or interview. I’m going to go out on a limb and guess there weren’t a lot of guy-and-guitar acts covering both Jewel and Nine Inch Nails in the same show.

On originals like “If You Can” and “You and I,” you can hear me testing the boundaries of a café-study-crowd'stolerance, causing one area newspaper to characterize me as "a bracing alternative on the sometimes sleepy coffeehouse circuit."

When you’re in the midst of striving to accomplish something, there’s a tendency to focus on what’s lacking—on the shortcomings you’re trying to surmount. In my case developing as a singer, songwriter, and live performer it was all about the notes I didn’t hit… The gigs I couldn’t get… And the audiences I had yet to reach. Thanks to a decade’s worth of hindsight, I can now appreciate the songs and performances as the achievements they’ve always been.

Listening back today, I’m grateful for the people who were there and for the opportunities I was given by the folks at Susan’s in Kent, Sonnet’s in Wadsworth, Jimmy’s in Cuyahoga Falls, and Muggswigz in Canton.

Whether you were present for one of these performances or are just now coming across this music, I hope the whirr and grind of the coffee machines, the tape hiss, and the murmur of a live audience add to the intimacy of the songs. Thank you for showing up—then and/or now—and thanks for listening.