in the event of rhythm 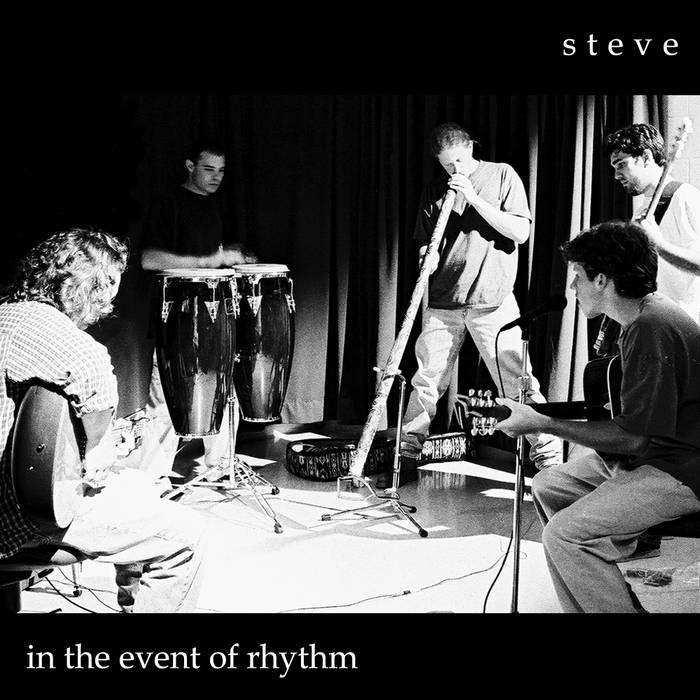 “Pilgrimaté” - Penned by Jackson, also on vocals -- which escape like some dark, delicious secret -- and rhythm guitar, the disc wastes no time taking us on a journey with this initial track. We are elevated to a panoramic view of a pending thunderstorm: Jackson’s moody guitar and vocals rumbling and crashing on top, Ullman’s soaring backing vocals pushing the dark clouds along.

“Darkest of Days” - Ullman moves to lead vocals and guitar and Ramsier pounds percussion that can only be experienced. Begins with soft vocals but quickly grows darker and angrier, losing its temper in front of us. Even as the song quiets, it threatens to boil over at any moment. Written by Ullman.

“Weird Kid in the Corner” - Kammer’s incomparable masterpiece tugs playfully at our hearts and senses of humor. Rich guitar textures and bouncing bass line make for a tremendous sound. “He hears music of a different kind” and such excellent lyrics tell a hilarious tale of a perpetually out-of-place student.

“Chapter Four (Sad Song)” - “Weird Kid” has led us away from the darkness of Tracks 1 and 2 to this poignant and heartbreaking ballad about the struggles in Ramsier’s life. Unflinchingly personal lyrics long for times past and lost memories. In the final verse, Ramsier raises quiet, subtle vocals, encouraging us to sing “My sad song.”

“World Unseen” - A tender tale of seclusion penned and sung by Kammer. Sobering lyrics such as “I wash my face but it doesn’t come clean,” “The sun came out but it was still too dark,” and “I have a woman that doesn’t know my name,” speak of, according to Kammer, “being afraid of the inevitable changes that occur in our lives.”

“Weakman’s Delusion” - Ambitious, grand -- simply epic. At eight-and-a-half minutes long, Jackson takes us on the true journey he only hinted at in “Pilgrimaté.” “Come with me and I’ll show you what it’s like to live” snarls Jackson. As opposed to Kammer’s victims of the cruel, dark world, Jackson is all that is cruel and dark. Sparse guitar and percussion paint the cold, bleak landscape of his delusion.

“Start Anew” - Sounds of ocean waves are subtly replaced by beautiful acoustic picking in this ballad written by Ullman for his girlfriend. Percussion completely absent except for the quiet waves of sound that reinforce the smooth lyrical splendor. As we’ve just come from the dark, gritty “Delusion,” we are left with no questions as to Steve’s incredible diversity.

“The Longest Day” - “Sometimes it seems that each day gets longer than the one preceding it, whether it’s from being alone, missing someone special, or just being bored at work,” says Kammer of his expression of despair and hope. Interwoven acoustic textures accompany, again from Kammer, incredible lyrics.

“Whammo” - A slow, muted acoustic riff is soon accompanied by tapping percussion and shakers, the overall sound gaining speed as each new sound is introduced. Drums enter, sending all into a fireworks show of rhythm before -- silence -- then a triangle, and finally, the only lyric (spoken by all) “Whammo.” And we begin again, this time going faster and faster; guitars hammered and drums pounded lighting-quick before the cut to “Whammo.” And we begin again, this time faster still. As a song, this is a train wreck with each broken car magnificently laid out for onlookers to admire. By the fourth “Whammo,” we have reached a brilliant blur of deftly arranged rhythm and sound before exploding into silence and, finally, laughter.

**The free digital download also includes a .pdf of steve's eight-page feature in the December 2000 issue of HỲP Magazine.**

remastered in 2014 by brian ullman and re-released on bandcamp September 20, 2014

a very, very special thanks to brian ullman....we all love you!